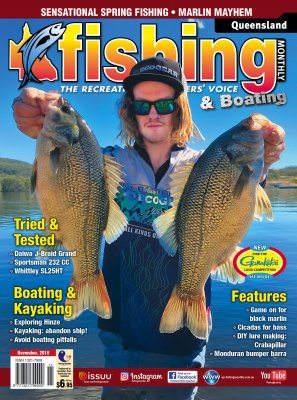 With the approach of summer and the big burst of warm water pushing down the East Coast, a lot of offshore anglers' minds turn to pelagics and, in particular, black marlin.
Black marlin are often seen as a fish which needs to be caught out of game boats or large trailer boats, however, they are easily accessible to anglers out of trailer boats as small as 4.2m.
Almost every year from November onwards we can expect to see black marlin off the South East Queensland coast. Generally most are juvenile blacks ranging from 15-40kg but you can encounter larger fish, some over 100kg at times. The run of juvenile black marlin is an inshore run of fish that are often found from as close in as the beach out to 150m of water, which is easy to access for most trailer boats.
The most common way to catch juvenile black marlin is trolling a spread of 2-5 skirted lures. By trolling a spread of skirts you can cover a lot of water and locate areas where the activity and marlin are, or intercept fish on the move. To troll a spread of lures effectively you'll need the right equipment and set up.
BOAT AND GEAR
Most boats over 4.2m in length powered with the right outboard will get you amongst the marlin. The rod holder position in your boat is critical to success, as this will ensure the lures are spread correctly to avoid tangles.
Rod holders in the back corners are ideal for shorter lures. Rail rod holders that sit wide of the gunnels, gunnel rod holder or outriggers are ideal for longer lures as they give the lure height and spread so they work properly.
Generally when trolling for blacks, most boats run a spread of 4-5 lures, but this can be daunting for people new to trolling as the lures can tangle easily. Depending on how many people are on board, it can be a bit of a process to set and retrieve, especially when you've hooked a fish. I suggest a spread of 2-3 rods as it's very easy to manage.
When running a spread of 2-3 lures, I suggest running your short and long corner set a little further back than normal, then run the third rod off the short rigger position. If you don't have a rigger, just elevate the rod or set it out a bit. I usually use rail rod holders and set the rods out and elevate their position until I'm happy with how it works the lure.
If you are confident running a fourth rod, run it so you have a longer lure in the spread - just in case the fish are a little boat shy and feeding further back.
For seasoned anglers, teasers are also great when run close to the boat, whether it be a mirror, dredge or bird teaser. However, for anglers new to this form of fishing I suggest going with out, as it's one less thing to worry about clearing when you get hooked up.
Traditionally a lot of juvenile black marlin fishing is done with light tackle. However, using overhead gear with 8kg monofilament can be a little hard to use if you haven't done this style of fishing before. I recommend using 15kg mono either on spin or overhead tackle, as you have a little more control especially if you hook a larger fish.
Spin tackle is perfectly fine to use on these smaller fish. A lot of anglers feel more comfortable using spin gear and it can handle small black marlin with ease. The 24kg gear can be a little too heavy to enjoy the fight on smaller fish so it's important to use the according drag.
You need to run at least 300m of line when chasing marlin. Most spinning reels won't hold this amount of 15kg monofilament so I suggest running 30-100m of 15kg mono as a top shot on top of your spool of braid.
Monofilament is good for this style of fishing as it is very forgiving - it stretches and absorbs the shock and headshakes, as juvenile black marlin are very acrobatic. Mono line also helps in hooking the fish as the stretch allows the hook to set better and it's drag in the water helps keep the hook in place, especially if you get slack line through the fight.
The gear I recommend is 20-30 size overhead reels and 5000-8000 size spin reels on 5-7' rods rated from 10-15kg or 15-24kg. The rod and reel doesn't need to be heavy for these juvenile fish, the most important thing when trolling is the right drag setting so the hooks used in the lures set properly and stay in.
The rule most used for strike drag setting is one third of the breaking strain of the mainline. For 15kg line you would use 5kg strike drag, but anything from 3-5kg is fine. Using the right hook rig and hooks in the lure will greatly improve your hook up ratio.