Those dam sooties by Bob Thornton 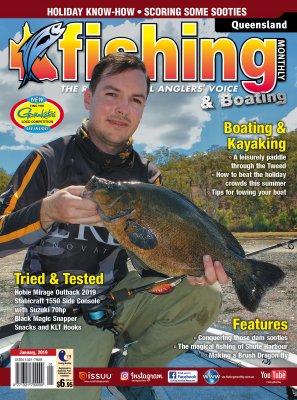 If you've ever travelled north into the tropics of Australia, or you're lucky enough to live in this amazing part of the country, you will have at least heard of sooty grunter. Often overlooked as a sportfish, even by the travelling anglers, these hard-fighting balls of pent-up aggression are a fantastic target, and deserve to be treated as such.
THE UNDERDOGS
There are many reasons that sooties, at least in my opinion, don't receive the admiration they deserve. One of the main reasons is that they are relatively common, inhabiting the freshwater reaches of many tropical rivers, and a quick look at a map of the north coast will show you just how abundant flowing freshwater is in this area.
Another reason sooties are dismissed is that in their natural habitat they are fairly small, rarely exceeding about 40cm. However, what they lack in size they more the make up for with their fighting ability, employing the gutter tactics akin to other dirty fighters like mangrove jacks.
The final characteristic that I believe does sooties a disservice is the fact that when you find good numbers of wild specimens, they can be near suicidal! Quite often anglers can have multiple quarrelsome 'soots' shouldering each other for a lure or fly, and catching two fish on one presentation is not uncommon at all. This is fantastic fun, and I will always enjoy catching wild sooties, but many anglers tire of the lack of challenge involved.
A DAM GOOD SOLUTION
A solution to these so-called 'problems', which addresses the three areas I've highlighted, is to fish for them in stocked impoundments! Impoundments with sooty grunter as the dominant species are few, but the fish in them can grow to be 60cm and upwards of 4kg, and the tactics involved to catch them are different to those in creeks. It's almost like fishing for a different species! I've learnt just about everything I know about dam sooties from Daiwa's Simon Goldsmith, and before my first trip up to Eungella Dam a few years ago, he eagerly drew me up a mud map of places to try and gave me plenty of advice on what lures to use. I could tell I was in for a treat!
Sooties are stocked as the primary predator in only a few dams, and the most well known are Eungella Dam near Mackay, Koombooloomba Dam near Tully, and Lake Julius near Mt Isa. Many dams better known for their barra fishing also have sooties stocked, such as Peter Faust Dam near Proserpine, Tinaroo and Copperlode dams near Cairns, and Lake Moondarra near Mt Isa. These latter waterways can provide excellent sooty fishing opportunities as well, however anglers will need to forget the barra, downsize their gear and specifically target the soots - I'll admit, this isn't always easy!
Sooties are also known to turn up in smaller, private landlocked waterways, such as farm dams and mining storages. They end up in these places either by stocking, or if they are endemic to the system prior to its being dammed, and will breed if granted access to flowing water. Getting into and fishing these locations is hard, particularly if you don't know any farmers up this way and don't work in the mining industry, but it always pays to ask the locals and keep your ear to the ground; you might just find your own pond full of 4kg sootballs!
As a quite aside, I believe that if the controversial Urannah Dam project west of Mackay goes ahead, this waterway will most likely become a sooty Mecca! It will be very interesting to see what happens.
PREPPING FOR DITCH PIGS
Access
Before you get after these fantastic sportfish, it's important to get yourself set up.
In major impoundments, access for vehicles and vessels isn't usually a problem, with Eungella, Julius, Koombooloomba, Peter Faust, Tinaroo and Copperlode dams providing adequate facilities. A 4WD, while not necessary, is preferred, with Eungella and Koomboolomba both only accessible via a long stretch of intermittently graded dirt road.
Of course, boats and kayaks aren't the only way to get into these waterways, and bank access, if possible, can provide some good angling opportunities. In the smaller, private land-locked waterways, bank angling may be the only way to fish it.
Artillery
The gear for dam soots is an interesting one. While a sooty is about on par with a bass of the same size in terms of power and stamina, dam sooties can regularly reach weights of 3.5kg and more! This means that if you're a southern angler, your regular bass gear may have to be scaled up a bit.
This really is the realm of baitcast tackle, and unless you're throwing anything lighter than 7g, I wouldn't bother using spin tackle. Nothing beats the accuracy and control an angler can achieve with a sturdy baitcast rig. There is a time and a place for spin tackle in sooty dams, but most of them time the fish are aggressive enough that it's just not necessary. However, if you're more comfortable with a spin rod,
While 2-5kg rods and 2000-3000 size reels will get the job done on most dam sooties, the 4-6lb braided lines we use for bass won't stand up to the structure-orientated hand-to-hand combat you run into with sooties. I would recommend using 10lb braid as a minimum, if using braid. As for leader material, 12lb fluorocarbon or mono is fairly standard, however an upgrade to 15lb may be in order if you're chasing the bigger models around heavy cover.
If you're a fly angler, an 8wt is perfectly suited to this caper. Lighter outfits will still subdue big sooties, however in this give-no-line territory, the 8wt will give you the perfect balance between comfort and pulling power.