Urban warfare in the tropical north by Dan Kaggelis 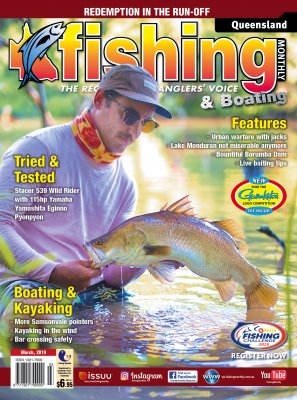 The impact of urbanisation and development of our waterways is increasing. With this increase comes many negative consequences for our natural environment and water quality. However, there are also several positive consequences, especially if you love your mangrove jack fishing.
While urban development has seen challenges for several fish species in Australia, it is fair to say the mighty mangrove jack is not one of these. In fact, jack numbers in some of our most urbanised areas across the East Coast have steadily increased, as they have learnt to adapt to their new man-made homes. While urban fishing for jacks is not a new fishery, with the steady increase artificial structures on our waterways, urban-based fishing is becoming more and more popular.
JACK THEORY
To understand why jacks have thrived in these urban environments, you first have to understand the life cycle of jacks. As juveniles, jacks take up residence in our mangrove-lined creeks and rivers. This is because when mature jacks spawn in open water, the jack larvae is pushed back into inshore waters where they take up residence in creeks and estuaries in both fresh and saltwater, depending on the system.
These areas provide the perfect place for these fish to access food, while at the same time hide from predation. One of the negative impacts of urbanization has been the loss of these mangrove nurseries, which have forced young and juvenile jacks to seek other areas which have the same appeal. Thankfully, many of our man-made structures in our canal systems, rock walls and even bridges have become more than suitable replacements, as they provide ideal bait holding structures, ambush points and refuge from predation. On top of this, many of these systems are quite large and deep, which means mature fish, especially in the South East, tend to hang around a lot longer, reaching trophy sizes. All these factors combined spells the perfect recipe for some drag-busting, lure-crunching red devil action.
FIND YOUR ARENA
When choosing to target urban environments, you have a number of different options up your sleeve. The first and probably the most well known areas are canals. This is mostly because canal developments are the most common form of human development on our waterways up and down the coast.
Floating pontoons and boat hulls have become the new 'mangroves' for many fish, including jacks. All these man-made structures attract bait, which in turn attracts predatory fish - it's that simple. While these structures offer plenty for the fish, they also offer plenty to the anglers too. The first being multiple pressure points, which make for great target zones, especially when throwing lures.
Pressure points are areas where the current or flow is either pushing hard up against them, or running across them. This flow creates a pressure edge, where baitfish congregate, and more importantly ambush predators like jacks like to sit waiting for the food to come to them. These pressure points are easily spotted when the tide is running and are mostly found on the edges of pontoons, especially around corner posts and even boat hulls.
If you have a pressure edge, then you also have the opposite on the other side of the structure called an eddy, which are areas of back water. These are usually found on the opposite edge of the pressure points, and are also highly desirable target zones, as they are also great ambush spots for bait looking to get out of the current.
FISHING URBAN STRUCTURES
Floating structures
Being able to spot these areas and targeting with precision casts so you can run your lures right through them is vitally important. Unlike snag bashing, where you have to throw your lure hard up to structure, targeting pontoons and boat hulls is a little different. You want to be putting your lure well past the target zone and running it past it or through it. This is because you want a reaction bite from a jack, which is waiting in ambush and if you plop the lure on its head you can sometimes spook the fish, sending it to cover and away from your lure.
Due to the nature of your structure being high in the water column, a medium to fast retrieve or twitch is ideal when going through the zone. This is where medium to shallow running hardbodies or paddle-tail plastics are ideal. Suspending hardbodies like the Ballista Trigger, Jackall Squirrel and Lucky Craft Pointer are also a favourite, as they allow you to sit in that sweet spot for longer. Poppers and stickbaits, especially at low light or at night, are also ideal, as the jacks are already sitting high in the water column. This makes for some awesome fishing.
The last thing when fishing canal pontoons is to think about setting your boat up for an extraction after hooking up. Have you electric motor facing away from the structure so when the strike comes you can power the boat out and get the fish clear.