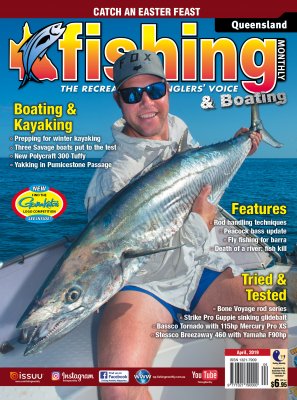 About 12 months ago a young angler stood on the banks of Pioneer River near Mackay for a photograph holding up a large fish he caught below the Dumbleton Weir, where the freshwater meets the salt.
He had never seen anything like it in the river before, so after the photo was taken he released it. That photograph recorded the first time a peacock bass, a Amazon River native, had been caught in Australian waters.
When that photo was shared and the fish identified on social media it caused a stir amongst local anglers who were already reeling from the discovery of another pest fish, tilapia, in the river system only a handful of years earlier.
Unknown to the angler at the time, the apex predator he released back into the water has the potential to wipe out native fish in the catchment.
Weeks after its discovery, scientists with the support of Fisheries Queensland, electrofished the water around the weir to work out how established this new pest was in the river system.
The good news was there was a healthy number of native fish, but the bad news was they didn't find the fish that was photographed.
Finding so many native species and no peacock bass gave local anglers cautious optimism that it was an isolated case, but that initial optimism was short-lived when two more peacock bass were caught recently in the Gooseponds, a sub catchment that spills into the mouth of the Pioneer River. Scientists electrofished the creek and removed a further two mature male bass from that waterway.
Now Mackay marine scientists, with the help of Mackay Recreational Fishers Alliance (MRFA), are scrambling to hunt down any remaining pest fish.
Catchment Solutions' fisheries ecologist Matt Moore said the race was on to eradicate the pest before finding a foothold in the catchment.
"Right now intensive sampling is needed, we have to go now. There was two in the Gooseponds in different locations. We have to get out there quickly and find out exactly where they are," he said.
"Time is of the essence. It's almost impossible to eradicate pest fish, the only chance you have got to eradicate them is at the start."
Mr Moore and the Catchment Solutions team knows all too well how important it is to act quickly to eradicate the peacock bass threat after its recent experience with another pest fish.
In 2014, the team initially discovered tilapia in the area and, despite working hard to eradicate them, the fish has spread. The presence of the tilapia was discovered in the Gooseponds when one of the Catchment Solutions staff was collecting fish and captured a small fish with an unusual pattern.
It was later confirmed that the fish was a tilapia. The species had already infested some river systems in Queensland, but had not been found in the Pioneer River catchment before 2014.
The team immediately looked at ways of eradicating the pest, including a dramatic idea of poisoning the Gooseponds.
Ultimately it was decided to trial the release of hundred of juvenile barramundi to feed on the pests. But the attempt to eradicate the tilapia failed after a flood in 2015 spread the pest outside the potential containment area.
Last year tilapia was discovered in Bakers and McCreadys creeks. McCreadys Creek is a small catchment to the north of Mackay, while Bakers Creek is to the south.
While the dreaded tilapia has spread widely, it's the peacock bass that has the potential to cause more damage to the ecosystem.
Tilapia compete with native fish for food; while peacock bass is an aggressive predator that only eats other fish, making them a direct threat to the native species that move into freshwater for part of their breeding cycle.
"[Peacock bass] are a voracious predator. They will eat anything in their mouths," Mr Moore said.
"They have acid in their guts so they can break it (food) down quickly and keep eating."
He said they also reach sexual maturity extremely fast, with the male maturing in one year and female in two years..
A scientific study of the impact of introduced peacock bass in Brazil's Rosana Reservoir and upper Paraná River revealed that native populations in the two waterways collapsed.
The density of native species declined by 95% in only a few years of the introduction of peacock bass, and some small species disappeared completely.