Trolling for inshore pelagics on hardbodies by Mick Underwood 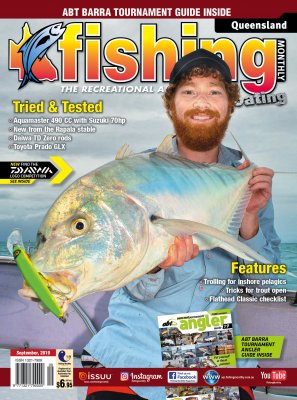 Imagine this: it's a stunning day. The sky is cloudless, and the ocean is sparkling in the sun, and you're hooked up to a monster fish. Your knees are pressed hard against the underside of the gunnels to stop you being pulled over the side, and the 12lb spinning outfit you're grasping in your white-knuckled hands is screaming in delight as line disappears at a breakneck pace. Then, a hundred metres out in front of you, a massive queenfish leaps well clear of the ocean's surface, and every person on board hollers in delight. The fish then throws in a somersault and a half pike before re-entering the water, and continues its seemingly unassailable quest for freedom.
This is light tackle sportfishing at it's finest, and it's something that occurs multiple times a day for the guys and gals that board my boat. And you know what, you can do it too, because it's dead easy. Over the following paragraphs I'll explain to you the what, where, why and how of this style of fishing, so you can get out and indulge in some adrenaline-packed light tackle fun.
During the cooler months here on my home fishing grounds of the northern Whitsundays, we get to enjoy extended periods of cool and clean water. This normally combines with vast shoals of baitfish moving inshore to inhabit our local grounds. As the bait moves inshore, naturally the pelagic predators do as well. Typical combatants to be found are multiple species of tuna, mackerel, trevally and some XOS queenfish. These are all big, fast and shiny turbo-charged critters that have a never-say-die attitude, and will regularly tire out even the most seasoned of anglers.
With the exception of giant trevally, the majority of the abovementioned species are clean fighters, and as such they make perfect light tackle targets. Using light gear not only increases the fun factor but also allows a wider range of anglers to become involved, as you don't have to be a weight lifter or footy player to be able to handle the tackle used (a bit of stamina can be handy though). And there's the old adage 'go light to get the bite', which is often true.
LINE
I use outfits rigged with either 12lb or 15lb braid for this kind of fishing. You can go heavier, but the heavier you go, the fewer bites you will get. I find that the main reason for this is because it affects the action of the lures. Most of the lures I use for this style of fishing were originally designed for barramundi fishing, and as such they are in the small to medium sized bracket. When you tow these guys around on heavier line, say 30lb or more, they won't swim as naturally as they do on lighter line, and a lot of brands won't swim to their prescribed depth either. It's only a small difference in the action of the lures, but it counts.
You can also go to the super light end of the scale and fish 10lb or less, and it will provide you with entertainment all day long. However, unless you intend to put the majority of your catch in the ice box or you're specifically fishing for records, this can be an irresponsible tactic, as the mortality rate of your fish will climb through the roof. Species such as queenfish, mac tuna and longtail tuna can be nearly impossible to revive if they have been on a hook for too long.
LEADER
There's nothing too complicated here; around 2m of either 30lb or 40lb mono or fluorocarbon is fine. I like to keep the leaders of a decent length because when you get a big green fish playing up all merry hell next to the boat, it's not always easy to remove the fish from the water as quickly as you would like. Having a long leader gives you something to hang onto to be able to steer the fish towards the landing net, lip grippers or whatever you choose to use.
Unless we are getting pack attacked by school mackerel or some other toothy critter, I don't like to use wire in my leader set-up as the bite rate noticeably drops off. Some days though it is necessary to use a bit of wire in order to save a fortune in lost lures. On such days I like to use a short piece of mono wire (around 25-30cm) connected to the lure with a haywire twist and then to the leader with a seven-turn Albright. Try to avoid using snap swivels here because they create a bubble trail which will attract the attention of every school mackerel in the vicinity. The mackerel will attack the snap swivel instead of the lure, continually biting you off. As well as being frustrating, this can get expensive fast. Far better to double the wire back on itself and connect the leader with an Albright.